The one that was highly publicized was given by Joseph Kennedy III, and was carried on most networks shortly after the State of the Union completed.   It was pretty mild, full of low-key aspirational rhetoric stressing unity.  It avoided harsh condemnation of Trump.
But that wasn’t the important one.

The more important one was given in Spanish, by an entirely different person, a Peruvian immigrant named Elizabeth Guzman, a Delegate in the Virginia House.
And this response was not merely a translation of Kennedy’s remarks, but a completely different speech.

It was an altogether more vicious and accusatory piece.  In it she says that Trump has “pushed a dark and extremist agenda that damages our national values and endangers national security” and that as a result immigrants are facing “terror under President Trump”.  She goes on to deliver a long list of accusations against him:

He has neglected our most fundamental American values.  He has replaced equality with intolerance, replaced mutual respect with racism. The President has attacked our families…

He has demeaned communities of color – launching a mass deportation agenda, and insulting the heritage of anyone who doesn’t look like him. He has imposed a hateful, immoral ban against our Muslim brothers and sisters…

He helps the privileged and powerful step on everyone else…

A long rant about the wonderful character of the dreamers follows these accusations, along with criticism, again in strident language, of the tax cut. She also accuses Trump of failing families in Puerto Rico, without providing any specifics. Perhaps the hurricane is his fault?

Her 10 minute speech ends with a a long list of “a chicken in every pot” goodies that the Democrats will deliver if only they can replace the hated Trump led GOP.

The stridency and venomous tone of her speech is in marked contrast to Joseph Kennedy’s mild and reasonable one.

Let’s face it, the few remaining white Democrat voters are being put to sleep with familiar lullabies from a retro looking Kennedy. It’s as familiar, and about as authentic, as a concert by a Beatles tribute band. And aimed at the same demographic.

The real Democratic future isn’t a faux JFK, but the angry, entitled La Raza activist ranting at her co-ethnics in this video. That might scare the legacy Democrats out of their sweet dreams, so it is presented in Spanish only on Univision.

If any further confirmation were needed that the rising tide of Latino immigration presents a fundamental threat to the unity of the nation this duplicitous set of speeches provides it. 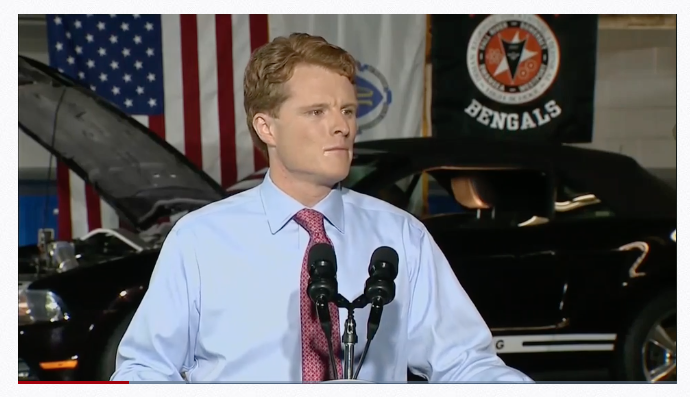